First and foremost, I’ll never claim to be an expert. The training schedule I’m sharing is the one that was created for me by an expert. At the start, I was able to run 10-15km but not at any great pace and was tired afterwards. This schedule was made for me so that I would be able to complete my first marathon in under 4 hours by building a solid base first. I had about 22 weeks to train but was ill for a week and half so I skipped those runs. The schedule I uploaded below is set for 20 weeks.

Before I started training, I had an ECG and a Lactate threshold test to determine my heart rate zones. My threshold was set at 174, my max heart rate was 195 and my zones were divided as follows:

You’ll see in the excel file that I use Aer, Ext and Int as abbreviations, followed by an arrow. If you know your zones, you can fill it in in the file.

You can find the file here: Training
It’s a simple Excel as it was all hand written by my physician, it also give you the opportunity to play with it if you want.

When I went to the doctor, I asked him to create a training schedule for 3 runs a week. I wanted to be able to combine the training with a healthy work and family balance. Not always easy.
The doctor mentioned that 3 runs a week is good, 4 is better. So if you have time, add another run each week in your “Aerobic training” zone. I enjoyed the actual training as almost every run was something different, you had to concentrate on different heart rate zone and it kind of helped against the repetitiveness of having to run all the time.

The schedule is set so that you work on your general strength first, get your body used to running, and then gradually increase mileage. Most runs are in kms but some are timed runs. You will get annoyed in the beginning that you’re running so slow, trust me. You know you can run quicker but doing so will push your heart rate too high and put added strain on your body. It’s massively cliche but it’s a marathon, not a sprint.

The first longer run is only after 7 weeks, that’s when you reach 16km but from then on in, most of your runs will be 15km+.

Your body will gradually get used to running 15-20km and it will become easy for you. I didn’t expect those type of runs would be so “easy” but if you stick to the schedule, it will be for you as well. It gives you a great feeling of accomplishment already, even though your goals is to go twice as far.

You’ll notice as well that you’re never running flat out during the runs, which means that about 30 minutes after a long training run, you’ll feel quite good and almost ready for more. This is a good sign. I was nearly never stiff the day after. You could feel your legs were a bit tired perhaps but nothing drastic.

At the end of week 17, you need to do a test at race pace. Don’t go too crazy, you don’t need to end with a huge sprint, no need to injure yourself. If your average heart rate is in the extensive zone, you’ve done well. If it’s above that then your run was probably too quick.

The following week is the big run. A 36km run which will test your mental resolve. A long solo run isn’t easy, you need to keep your mind occupied.
I planned three 12km loops so that I could pick up some drinks and food every hour. I have to admit, on the third loop I was so sick and tired of the run, so bored, that I took a shortcut and ended on 33km. But I did feel like I had it in the bag. If needed, I would have done the 9km extra and run a marathon. But it wasn’t going to make a difference here. I was happy enough with the huge run I had just put in.

The two weeks after that, leading up to the big day, you decrease your mileage and make sure you recover enough and are ready and rearing to go!

During my five months of training, I lost about 11kg. I felt stronger than I had in a long time and ready to go for the marathon. I tried to get a session of cross training in every week (we bought a second hand one – great decision) but that didn’t always transpire though.

We ate quite a bit of pasta and rice dishes which is good for you when you’re training hard. I tried to skip huge second helpings, which I didn’t before. We minimized the pizzas, chips, Chinese food,… Which isn’t to say we still didn’t have it. I’m not a professional athlete, and it’s too late for that anyway, so I’m not going to deprive myself of some lovely Belgian chips or a quattro formaggi pizza. A man’s got to live a little 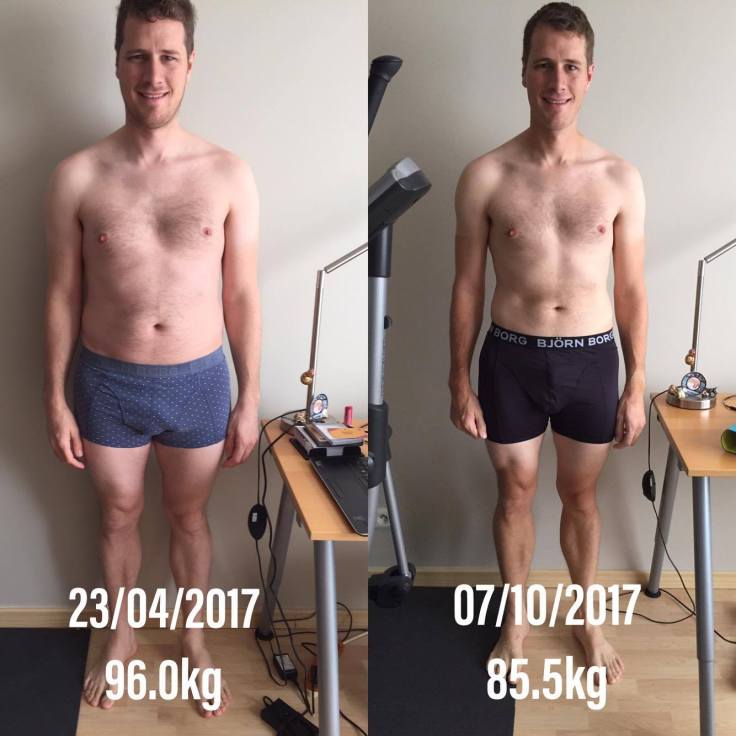 All books and doctors will advise it, but try to limit your alcohol intake too. I love myself a nice beer or glass of wine but it won’t help your training. In my last month before the marathon, I didn’t touch a drop. I wanted to go for it at that point.

But don’t forget, you’re burning calories like crazy when you go running so you can afford to eat. Just try to go for the healthier option if possible, and splash out once in a while.

Any questions or comments, feel free to post below, very much open to suggestions and tips!